The things we carry and don’t

I think there are times that all I write about are gear and apps. A look back at the infrequent blog posts here would seem to confirm that.

So today, we’ll talk a little about philosophy behind the gear I’m using.

My kit in June 2015 had 11 separate pieces of hardware in it, not counting a power brick. My most advanced kit now has 11 pieces — but they’re different. And the basic kit I carry with me all the time has four pieces, plus a power brick. Technology has transformed the kit.

I used to always carry an iRig or iRig Pro to run an XLR-corded mic with me. Most days now, I use a lav or shotgun mic designed to go straight into the phone. Sometimes I’ll use a Lightning connector-specific condenser mic. The quality of gear has gotten better — to the point where maybe the XLR-corded stuff isn’t so neccesary (note: I still have an iRig, iRig Pro, iRig Pro Dual Channel and a Shure MVi for when the occasion calls for it).

I always used to carry external lenses with me, either a set of 37mm screw-on lenses or a clip-on or slip-on like Olloclip or Moment lenses. Changing to the iPhone 7Plus with the dual lenses meant I didn’t have to anymore. The regular lens on the 7Plus has a focal length of about 21mm, which is plenty wide. The zoom lens on it is a 52mm lens. I don’t need much else.  Getting rid of external lenses means I don’t have to carry a frame for the phone that will accomodate them.

I always preach that adding quality to mojo products is a tradeoff: The more equipment we add to raise quality, the less mobile we become. But now we’re improving the chassis in significant ways. And those technology improvements mean that we can be more mobile and still have a high production quality.

It’s changed. When I started doing mobile work, I was about Big Mobile — end-to-end mobile production. Shoot it on the phone, edit it on the phone, move it to the publishing outlet. That outlet, in my mind, was invariably a legacy media outlet. Let’s build a 2 1/2 minute piece for the 6 p.m. show.

Spending time in newsrooms has had me reconsider that the legacy product doesn’t want mobile-produced stuff. The news directors and producers want stuff built in AVID and ingested into the CMS. They’re largely agnostic about the source of the footage, but they want it built at the mothership, or something that approximates the mothership (a laptop in a van with a LiveU or Dejero unit in it).

That said, newsrooms want mobile video and mobile produced pieces. But they want them for social. They want 10 :20 pieces, not a 1:30 piece. As a result, they’ve invested in simple production technology like Videolicious, rather than a more complicated and sophisticated product like LumaFusion.

How does that play into what’s in the kit? I used to pack everything every time. Stick mic? Check. Wireless set. Check. Huge LED light? Check. And so on. Now I don’t feel like I have to. I feel like I can carry, most of the time, stuff that accomplishes 100 percent of what I need from a quality perspective 85 percent of the time.

Choosing the best rig for you — October 2016

This is an incredibly nerdy post. I’m going to write — a lot — about bits of steel and plastic and how they have become meaningful in my life. We’re talking about the mobile kit. I get asked two questions: “What apps do you use?” and “What do I need to do mobile journalism?”

I’ll deal with the former in this post. The latter is a tougher question because it really depends on two factors: What do you need it for and how much do you want to spend?

If you’re the night cops reporter for a newspaper, there’s a pretty good chance that you’re not going to need high-quality audio. Your prime directive is to get some video back to the web wombats fast. You probably don’t need a wireless receiver and transmitter. It’s a different story if you work for a TV station. It’s another story altogether if you’re using a mobile journalism kit to shoot a film or a commercial.

There are eight interactive images below showing a variety of different kit configurations.  Mouse over a button on an image to see its description, click on the button to go to a page where you can buy whatever you’re looking at.

But here’s some basic guidance: 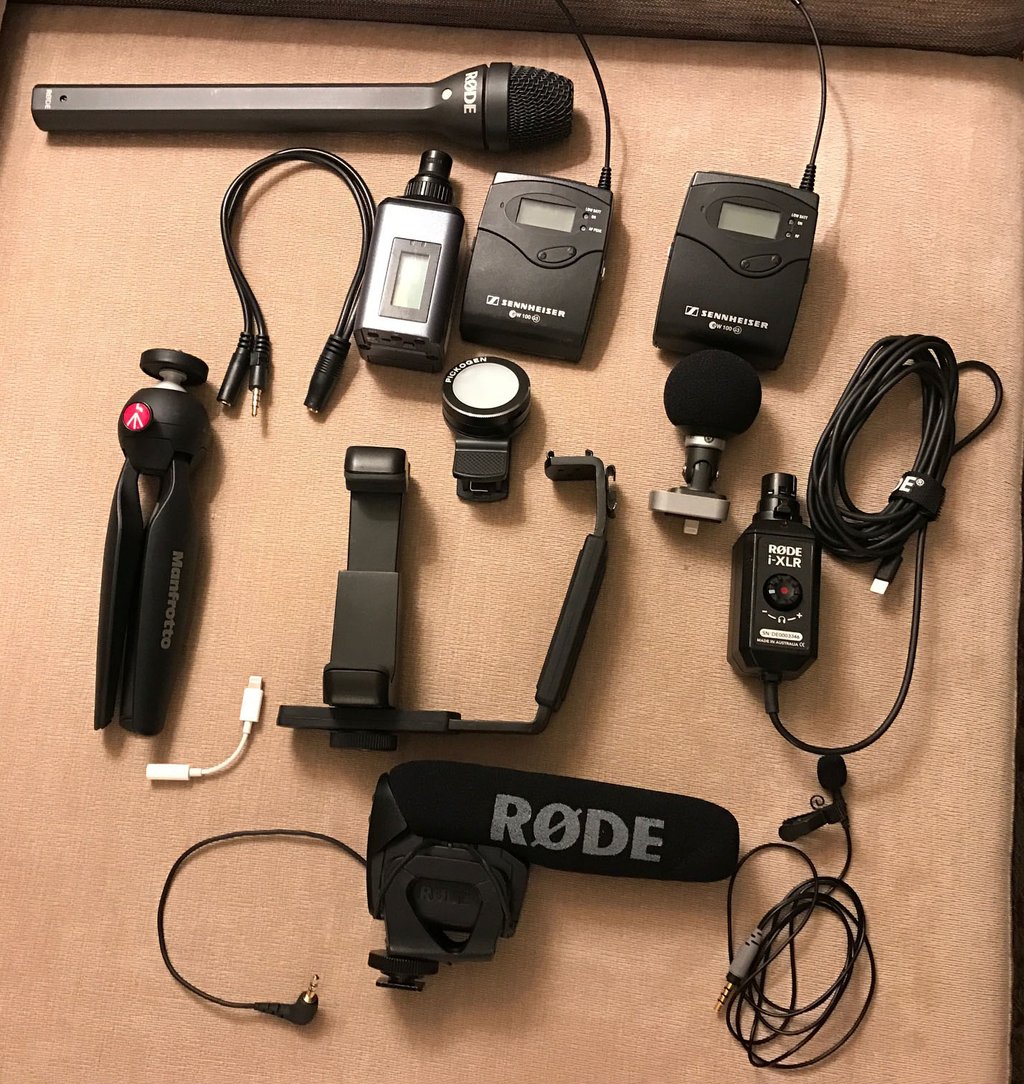 Things change. I’ve swapped out almost my entire kit since May. Why? I changed my phone from an iPhone 6 to an iPhone 7 Plus, so I felt like I didn’t need external lenses. I went back to using the Rode VideoMicPro instead of a different Rode product because I liked the directional sound better for how I was using it. I switched out the articulating wrap-it-around-anything tripod for one that hand carried better. I swapped a clip-on light for a light that fit in the cold shoe. 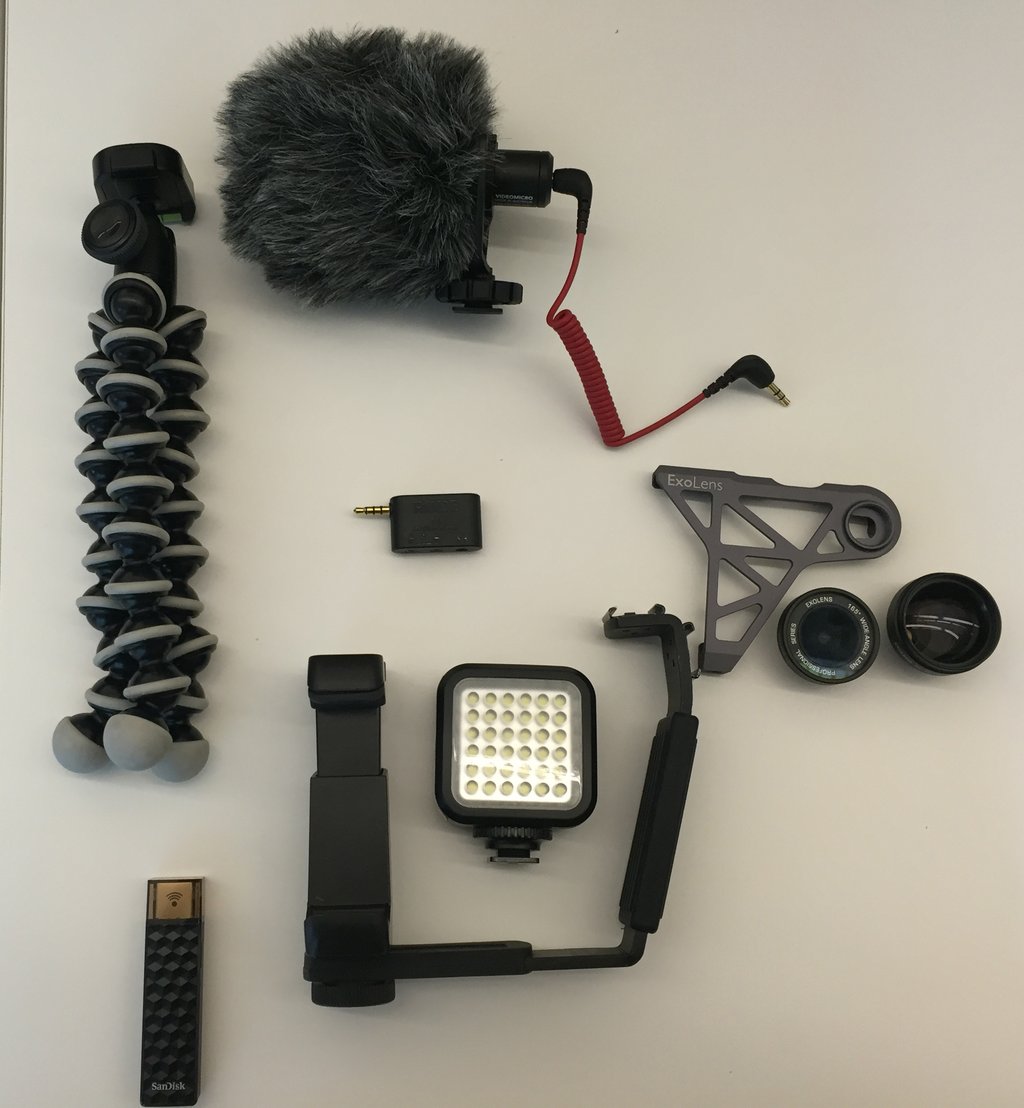 Now we get into the many combinations based on platform and use.

Run n’ Gun No. 1: Lights, sound and the ability to carry or mount. AJ+ uses a rig very similar to this one. 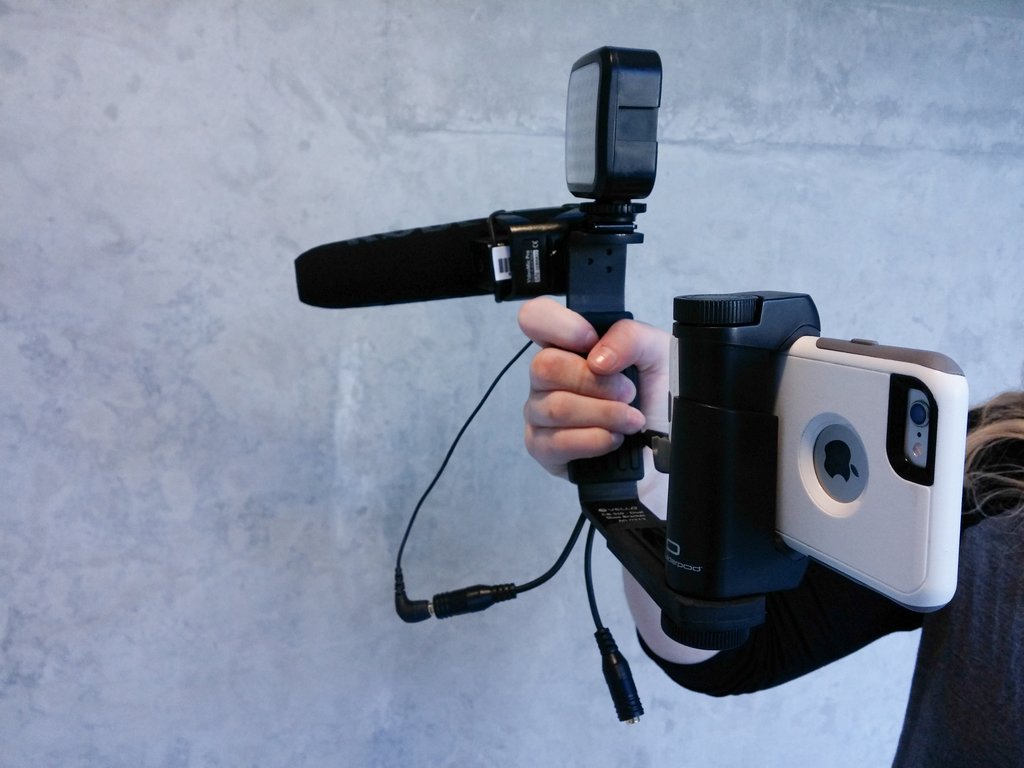 Run n’ Gun No. 2: The Single-Handed Shooter (with a remote receiver) 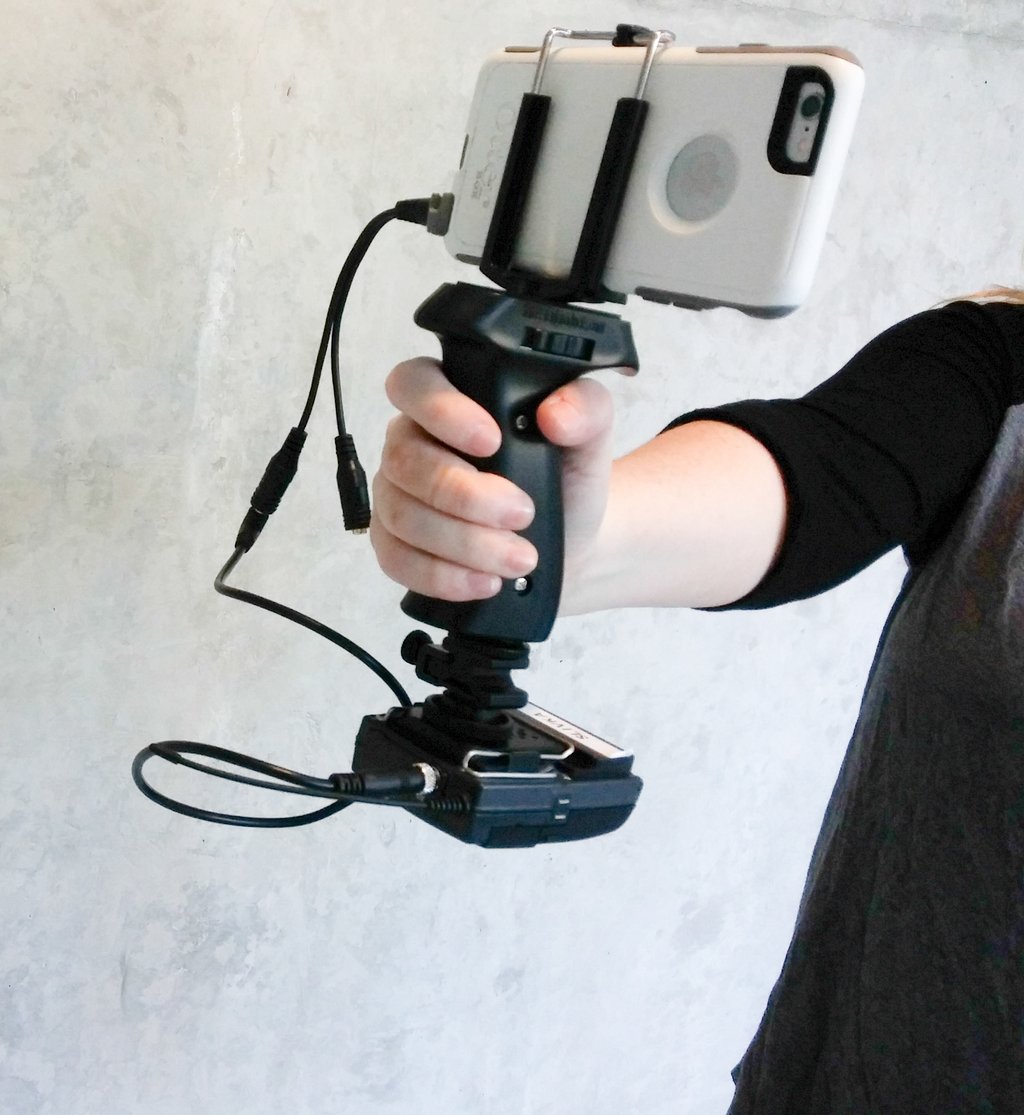 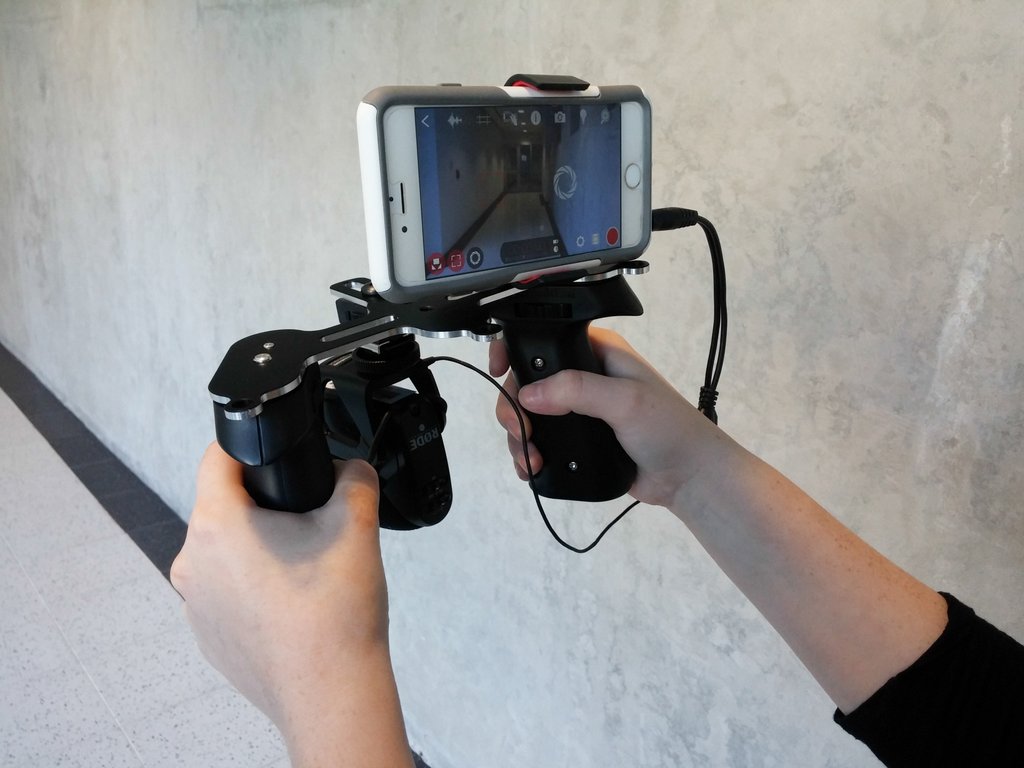 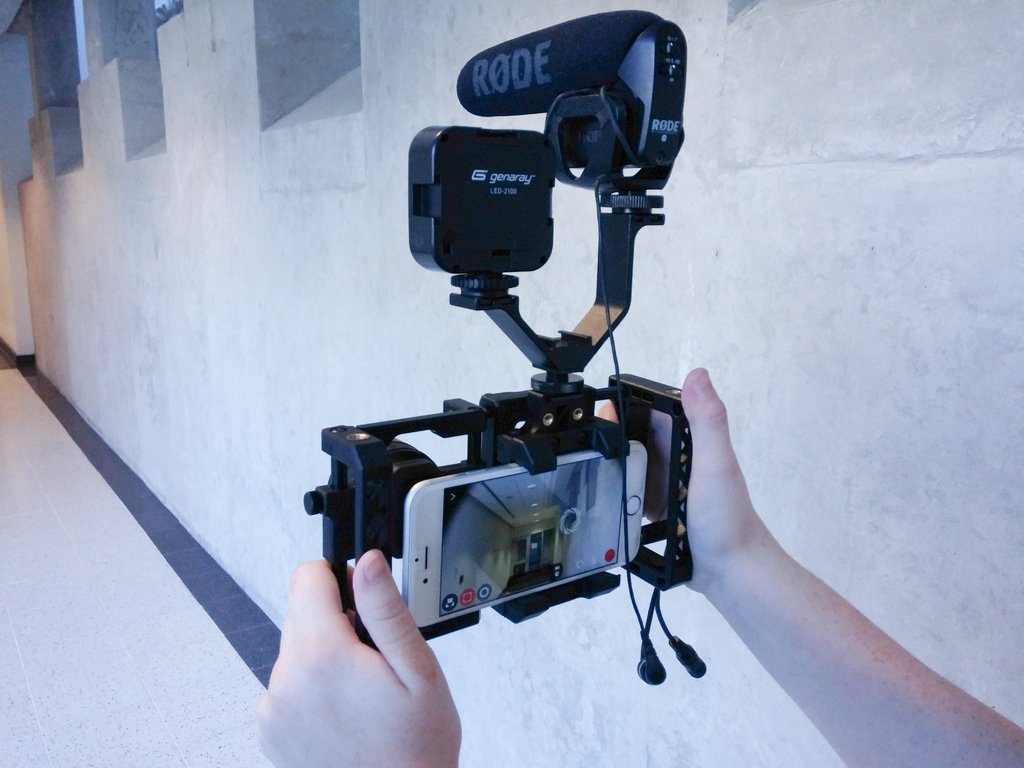 The iPad Shooter (with sound, light and an external lens) 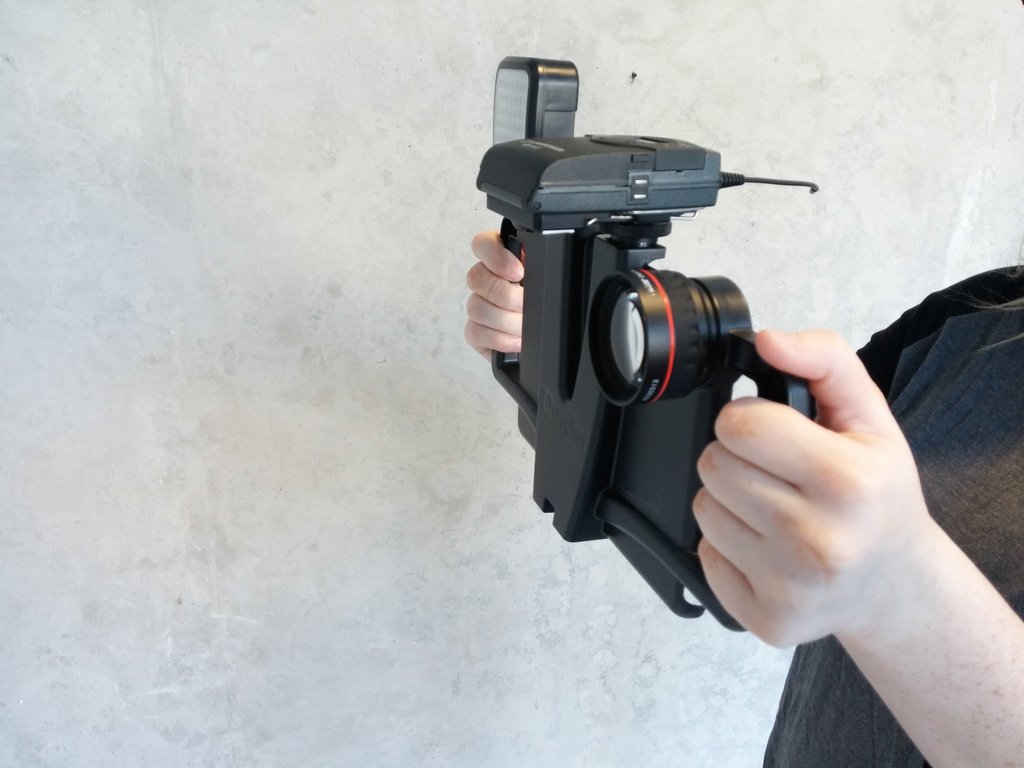